I’ve seen some rather extreme reactions to the whole name changing thing that’s happening. Some people are saying they will delete anyone with this name or that. Some are telling their friends if they change their names they can’t be friends. I would like to believe that ALL of these people are kidding, but we know that at least one of them isn’t. What has surprised me the most is the amount of hateful judging that’s been happening on social media.
I saw one post that suggested anyone that paid to have their name change was a shitty person, because they could’ve given that money to charity. That kinda set me off, to be honest. I mean, who do you think you are judging everyone that changes their name? Is it YOUR money? No, it most certainly is not. If we’re going to sit here and judge one another for not giving what we can to charity, let’s start with the time he spent writing that post and defending it. He could have spent that time doing something helpful, don’t you think? I personally think someone’s a wee bit upset cuz he can’t change his personality for $40. You can’t know what people do with their real life funds. You don’t know whether or not they give to charity. Not everyone broadcasts every donation they make. I know I don’t.
I get that people think it might be a waste of money or a silly thing to do, especially since we have display names, but you can’t truly know the reasons why people do what they do until you’ve lived their lives. Oh, but you can’t live their lives, can you? No, cuz then it would be your life and you clearly would’ve made difference choices, etc. So, take it easy on each other and remember that now more than ever we need to be supportive. Love one another please…we have enough hatred in the world already, there will never be too much love. ♥

What a Night! *RARE* – Heat Massive – The Bearded Guy 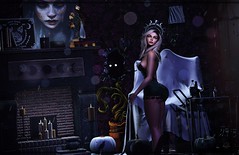